Challies is doing a great book giveaway this month. You can enter by clicking on the banner below. If you dig the Puritans (and you ought to if you don't), jump in on this one.

Things have been a bit slow for the past few days, so I'll direct you to a few of the things with which I've been wasting my own time:
Posted by John at 2:44 PM No comments:

The Movie They Don't Want You To See

Today's the day. Expelled: No Intelligence Allowed opens nationwide. Documentaries don't tend to last long in the theaters, so make sure to see it this weekend. Find local times and theaters here. 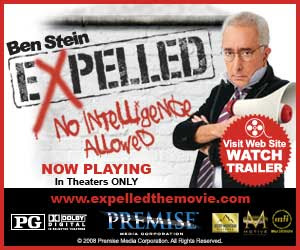 Okay, baseball guys, I have a question for you. A baseball-fan buddy of mine stopped by a little while ago and asked me, "Chipper Jones. Possible Hall of Famer?"

My first instinct was to laugh and say, "No, of course not." But I've frequently argued against the notion of basing Hall votes on who "seems like a Hall of Famer." As Michael Lewis' Moneyball makes clear, statistics are always a far better measurement of greateness than the subjective standard of "seems."

So I looked up the numbers. And I have to admit being surprised. Jones is in his 15th season. Among his lifetime numbers:

If the voting were today, no, Chipper Jones would not be a plausible Hall of Famer (though a very good player). But it seems to me that if he put in four more solid seasons--say .300, 85 RBI's, 25 HR's, he'd have the kind of career numbers that would make him a plausible candidate. In most of the 2000's he was overshadowed at third base by Scott Rolen, who made numerous All Star games because Cardinals fans are better than Braves fans. That's part of why he doesn't "seem" like a Hall of Famer. But if he had four more fairly typical years at his current pace (which is very possible, since he hit .337 last year at the age of 35) , he'd finish with about 500 homers, nearly 1700 RBI's (which would put him ahead of RBI machines like Tony Perez, Mike Schmidt, Andre Dawson, and Ernie Banks) and a lifetime .300 average.

If all that happens, I think he's got a shot. What do you think?

Chipper Jones Baseball Hall of Famer
Posted by John at 1:06 PM No comments:

Looking forward to attending this conference tomorrow through Thursday. Fortunately, I'm not flying American Airlines, so I have at least a 50/50 chance of getting there.

Here's something I won't be doing on the trip. 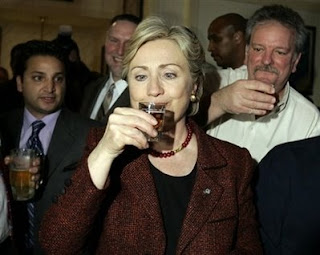 Very classy. Very presidential. She's one vacation videotape away from being Paris Hilton. If Paris Hilton were a middle-aged female gym coach.
Posted by John at 3:00 PM No comments:

Okay, This One Got Me

Call me a sucker, but it's hard to watch this and not get a tear in your eye. The Boston Red Sox had Bill Buckner come throw out the first pitch yesterday. And he got about a three minute standing ovation.

The ad for Gore's Alliance for Climate Protection is set on a beach, with Robertson and Sharpton saying they "strongly disagree" about a lot of things, but agree on the need to care for the Earth.

On Monday's broadcast of "The 700 Club," Robertson said that when the filming was done, the three of them prayed together at Gore's urging.

Robertson said he agreed to appear in the ad because he believes people should be good stewards of the environment. He added, "Al Sharpton's a nice guy and we had a lot of fun together."

Pat Robertson Al Gore Al Sharpton
Posted by John at 11:44 AM No comments:

It's time for today's edition of "Really Odd Lyrics From Surprisingly Popular Songs." It's generally, though not always, occasioned by my listening to the 80's channel on XM Radio. I listen to the 80's channel because I don't think there are ten songs I know that have come out since 1994, and being a conservative sort, I'd rather be subjected to "The Safety Dance" one more time than try something new.

Anyway, the first entry comes from the big Genesis hit, "Tonight, Tonight, Tonight," which was popular enough to appear in both a Michelob ad and an episode of Magnum P.I. (guest starring Frank Sinatra, no less) back in the 1980's:

I saw Phil Collins once in an interview say that the lyrics for his still-ubiquitous hit "In the Air Tonight" were entirely improvised. I think "Tonight, Tonight, Tonight" might be evidence that all Phil's songs were written that way.

Second, we have these incomprehensible utterings from Paul Simon's "You Can Call Me Al," which was a huge hit even despite having Chevy Chase in the video:

Good luck figuring that one out. The song is now 20 years old, and nobody's done it yet.

And finally for today, an oldie-but-goodie from Pink Floyd's only number 1 hit single, "Another Brick in the Wall, Part II":

A fair question indeed. One which has yet to be satisfactorily answered.
Posted by John at 9:18 AM 3 comments:

If, like me, you happen to be an aficionado of classic broadcasting, here is an amazing resource that has been put online by the University of Texas. It's an archive of interviews from "The Mike Wallace Interview," which were broadcast on ABC in 1957 and '58.

You don't have to create an account or log in or anything. The programs are simply right there to be accessed. Among the ones I'm looking forward to watching are Malcolm Muggeridge, Steve Allen, Bennett Cerf, Reinhold Niebuhr, and William O. Douglas.

Aside from the historical value, they're also highly entertaining to watch for the ubiquitous Philip Morris cigarette commercials. In my opinion, the very definition of "classic television" might be "programs in which the host smokes a butt on camera without shame." Which is why Tom Snyder is also classic television.

Here's an oldie-but-goodie evangelical trope that I've decided I'm no longer interested in: the ubiquitous "unspoken prayer request." Or to put it in a more positive way, I honor an unspoken prayer request in the fullest spirit in which it's offered: since it's unspoken, I don't speak it.

I mean really, how is that supposed to work? And what is the purpose of it?

Under what theology of prayer is that meaningful or effective?
Posted by John at 3:44 PM No comments: