And that's how we play "Around the Horn."

I see we have some post-NBA Finals reaction in the mail bag:

I think you may be overestimating my importance a mite. Enjoy the win and relax a little bit. How sad it must be to be so bitter even in victory! But since you took the trouble to write....

I'm not the least bit embarassed by what I wrote. I've written many, many things to be embarassed about. That's not one of them.

Let's give this some thought. Why do you think I specifically mentioned that I hadn't watched Wade play? Think about that a minute: why would I have pointed that out? Indeed, that was the whole POINT of the post: Wade is a celebrated player, and yet showed nothing in Games 1 and 2 of the NBA's biggest showcase. Nobody who'd only seen him in those two games would have any idea what all the fuss was about, and considering it was the NBA Finals, there were millions of people watching in exactly that position.

I figured that "he was a special player," seeing as though he was on the cover of SI and all. Duh. If you're anything other than a dull literalist, you'll understand that the real point I was making was that "Dwyane [sic] Wade is not even close to playing up to his capability." After that, he began to play in a way far more consistent with his reputation, obviously. Of course I was more impressed in Games 3 through 6. Who wasn't? What, are you saying I should have been impressed with games 1 and 2? I don't think even Wade would say that.

And my larger point, namely that the comparisons with Jordan are inane, still stands. Show me any two consecutive games in the playoffs where Jordan didn't show anything. Show me two Finals games where he didn't show anything. Show me a time Jordan would ever have missed two crucial free throws in a huge game like Wade did at the end of Game 6, which have been forgotten only because Dallas missed a wide-open 3-point opportunity.

He's a nice player, and I was rooting for the Heat to win. I'm excited, and I think Wade has a great future. But my post was correct: Games 1 and 2 were an embarassment to him, and he's not in Jordan's universe. It's okay. He doesn't need to be. Nobody else is either. But Jordan never embarassed himself in big games, and if a Martian were to come to earth and randomly select from history one Jordan Finals performance to watch, he'd never find a game where he was wondering what the big deal was at the end of it.

That's the difference, and that's what I was saying. And I was (and am) right. As always.

Cheers,
John Rabe
Posted by John at 3:32 PM No comments:

Will They Use The Bubble Tops?

To the astonishment of anyone who watched the first two games of the NBA Finals, the Miami Heat are (is?) the 2006 champions. South Florida is euphoric after years of basketball futility.

I'm coming up with this one off the top of my head, but I believe this is the first time in NBA history that a team without a plural nickname has won it all. The Jazz had a couple of shots, but never closed the deal. It may even be the first time in major team sports (unless you count hockey as a major team sport, which nobody does). Of course, it doesn't hurt that neither the NFL nor Major League Baseball has any teams with singular names, but still...

I'm told (and the ABC broadcast reiterated) that a Mavericks victory parade route had been developed and published in Dallas sometime around Game 2. Heat players mentioned it as part of the inspiration for their sudden turnaround.

If it's true, that's the most ill-advised parade in Dallas since the presidential motorcade snaked through Dealey Plaza.

The Way We Were

At halftime of the NBA Finals game last night (just before detectives discovered Dwyane Wade and brought him out of hiding), ABC aired a touching feature about a young kidney transplant patient whose life was touched by fellow transplant patient Alonzo Mourning of the Miami Heat.

It reminded me of another touching true story involving the philanthropic Mourning.

When I worked at KFNS sports radio in St. Louis in the early 90's, we producers were looking to get some guests on the air. One of the ways we frequently did this was by "ambushing" (as we called it). "Ambushing" was simply calling a sports team's hotel, asking for the room of a player, and when he answered (the majority of them, suprisingly enough, register under their own names) asking him if he'd come on the air with us for a few minutes. It wasn't a fun job because many players understandably didn't care to be bothered in their rooms and could be a bit terse. Occasionally, however, there were some really nice ones, even among the stars. I recall Greg Maddux, Curt Schilling, Chipper Jones, and Andy Benes as being particularly friendly and accomodating. And NHL players were uniformly wonderful.

Anyway, ambushing wasn't the most fun in the world, so we'd get interns to do it when we could. One day, probably in '94 or '95, I asked one of our interns to try Alonzo Mourning in his room during a Heat road trip. The intern dutifully looked up the hotel number in the NBA media guide, got Mourning on the phone, and asked him if he'd be willing to come on the air with us for a couple of minutes.

"And where are you guys at?" inquired Mourning.

A few sports observations from the weekend past:

Tony Hendra, an author and former National Lampoon writer who occasionally jots for the always-silly Huffington Post, isn’t taking kindly to Ann Coulter’s new book or her comments promoting it.

Writing as God, the liberal Hendra (without any hint of knowingness) goes after Coulter precisely the way she argued liberals always do in her book Slander: by attacking physical appearance. Writes Hendra:

That can't you keep a man or have kids, because you're literally inhuman - a cold-blooded vertebrate, a bipedal reptile, a hilarious genetic joke. How would your millions of pinheaded fans feel if they knew that you were actually...an advanced form of velociraptor? That you never wear backless outfits because there are vestigial leathery batwings sprouting from your shoulder-blades? That even if some male could fertilize you you'd lay eggs? That if those eggs hatched you'd eat your young? Because that's what you're hardwired to do, Ann, you poor little velociraptor, you.

…Ann, you don't know Me. You've never spoken to Me in the 45 years of your twisted, spoilt-brat existence. You don't believe in Me or any of My works least [sic] of all that being the God of love the only thing I hate is hate - the force that drives every cell in your bony sunken-faced velociraptor frame. Yours is a faith of convenience shining bright - and about as deep - as aluminum foil.

Well. And this from the pro-women party.

I don’t know if the only thing God hates is hate itself. In fact, I’d be willing to bet just about anything that God really, really hates child molesters. Of which Tony Hendra is one.

Oops. Yes, Tony fails to mention that, either in his little note from God, or in his books on his supposed spiritual awakening. It’s hard to imagine anything more misogynistic than what he’s written here, but Tony Hendra’s repeated sexual abuse of his daughter when she was young probably tops it.

In speaking to The Times, [Hendra’s 39-year-old daughter Jessica] authorized a reporter to talk to two therapists who treated her, as well as three friends in whom she confided, and her husband and mother. All said that Ms. Hendra credibly told them at different junctures of being molested, one of them when she was 12.

…During the interview, Mr. Hendra at first simply impugned Ms. Hendra's accusations. When informed that friends and therapists said that Ms. Hendra had told them of abuse, he was quiet and sounded shaken and, saying that these were developments he was unaware of, asked if he could have five minutes to catch his breath and then call back.

He called back 45 minutes later and made up some story. Incidentally, those accusations don’t appear in the National Enquirer; they come from the liberal "paper of record"--the New York Times.

So I wonder if all the wild-eyed liberals at the Huffington Post feel better today, having just taken a theology lesson from an unrepentant child molester?

I present to the world....Buck. 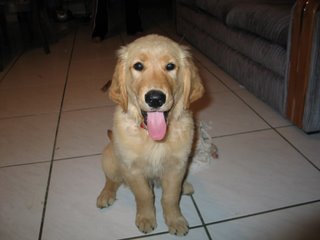 And one more. He sits like this, which seems uncomfortable to me. 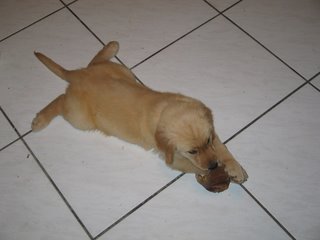 The Mark Of The Dense

First of all, there’s good reason to believe that the current popular conception of the biblical meaning of this number is simply wrong.

You had one year in which you could legitimately find a 6/6/6, and that was in the year 6 A.D. Except in 6 A.D. they didn’t even know yet that it was 6 A.D., so it passed them right by. They didn’t figure out the A.D. years until centuries later.

So I hope I've made my point. I'm off now to the license bureau to have the microchip implanted in my forehead that will allow me to buy and sell at Sam's Club.

Why do things like this not happen to Barry Bonds when he's on the way to breaking major home run records?

Why would Albert Pujols go on the disabled list for the first time in his career a). when he's having one of the greatest seasons of all time, and b). he's on my fantasy team?