There Were No Rains To Bless--It's Winter

Though my sleep schedule won't be normal again for weeks (I woke up at 3am this morning and haven't been able to sleep since), we arrived safely home from Africa yesterday afternoon after a successful and blessed trip.

Tanzania has got to be one of the most naturally beautiful countries in the world. They have almost every type of terrain imaginable, from green mountains to dusty plains to lush jungles and everything in between.

Here's a pic of John Jr. and I at the Ruaha National Park where we got to spend one day as tourists on safari after our work was done. 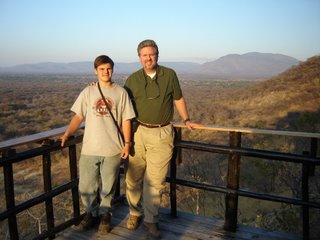 It's an amazing place in the middle of nowhere, and everywhere you turn you see stuff like this: 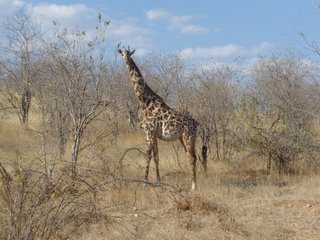 And finally, here's one of the coolest places on Earth. It looks even better than in the picture, and you're the only one there. You have it all to yourself. It's called Matema Beach (on one of the nothern shores of Lake Nyassa, which is also called Lake Malawi, at the foot of the Livingstone Mountains, which I presume are named for the discoverer of the lake, David Livingstone). It's only accessible via a very bumpy 2 hour drive over dirt road from Kyela Town, which itself is about a ten hour drive from the airport in Dar Es Salaam into the interior of Tanzania. If you ever find yourself in this part of the world, trust me, you want to go to Matema Beach: 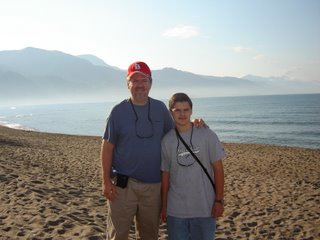 Thanks for your prayers while we were gone. It was a great trip, but man, oh, man, is it good to get back to the USA. We have the best lives in the world here.
Posted by John at 4:25 PM No comments:

Gonna Take A Lot To Drag Me Away From You

As promised, I'll be ducking out for a couple of weeks beginning now. Our flight leaves for London this evening, and after a day of sightseeing during an all-day layover, we will leave there for Tanzania on Thursday evening.

I plan to be back online around July 31st, so I'll see you then. In the meantime, if you think to pray for us and our mission there (we'll be teaching pastor's conferences, visiting schools, and helping some churches there) we'd greatly appreciate it.

Now that I've finally figured out how to put pictures on Blogger, there could even be a photo or two when I return. But try to stifle the shudders of anticipation and go about normal life anyway.
Posted by John at 11:39 AM No comments:

Say It Ain't So

Because I'm woefully behind the times due to work and preparations for this Africa trip, I've only just discovered that one of my favorite blogs, The Rough Woodsman, will be shutting down soon.

They've also, in parting, been kind enough to include me in their hall of Blogging Icons (though they're lacking a photo of me which, I just happened to discover after a flurry of furious Googling, can be found online here).

I'm still hoping they'll reconsider (closing the blog, I mean, not including me in the Blogging Icons). But it's been a great ride.

Related Tags: The Rough Woodsman
Posted by John at 11:15 AM No comments:

This may be the single most disturbing thing I've ever read:

One little girl entering Broward County kindergarten this fall is actually a boy.

Few will know this genetic truth, because the 5-year-old's parents and school administrators have agreed that it's in his best interest to blend in as a female.

Mental health professionals have diagnosed Pat -- not his real name -- with gender dysphoria, a condition in which a person believes that he or she is the opposite gender.

It gets worse, and WARNING: it contains some graphic descriptions:

The soon-to-be kindergartner looks quite feminine, cartwheeling around the yard and playing with dolls. Pat says he hates his penis, and he refuses to wear boys' clothing.

He and his three older siblings -- two girls and a boy -- live in a middle-class Broward County neighborhood with their father, an attorney, and their mother, who has a master's degree in counseling.

Pat's parents had never heard of gender dysphoria until they took their child for treatment. He was insisting that he was a girl, and often tried to hide his penis between his legs.

After long consultation with a team of pediatric endocrinologists and therapists, then with school officials, the parents decided that it was in Pat's best interest to live as a girl.

Okay, here's my typical insensitivity coming in to play, but I'm quite willing to go on record as guaranteeing that every single person involved in this case, from the parents to the social workers to the school officials to the attorneys to the "noted gender specialist and sexologist" is a complete and utter whack-job.

"Gosh, John, that's awfully harsh. Couldn't this happen to anyone?"

I doubt it. I can't absolutely rule out any physical issues at play here. Yet for some reason, I'm not surprised to hear that the boy's mother has "a master's degree in counseling," whatever that is. Considering the complete scientific bankruptcy of the so-called "mental health" industry and it's spectacularly ineffective "therapies," it's hardly surprising that a whole cadre of them is consigning a child who doesn't yet know his right from his left to a lifetime of freakhood. It's 21st century phrenology.

Notice that the people steering the ship here are mainly "gender specialist" Ph.D.s, "mental health professionals," counselors, educators, and gay activists. There's a conspicuous lack of input from any of the hard sciences (with the exception of endocrinology which, let's be honest, also frequently deals with most of the vaguest and undefined conditions in medicine, such as the all-encompassing "thyroid issues") and a pervasive input from the very pseudosciences which have been most captured by leftist ideologues.

Think about it a minute. What kind of kid says these kinds of things about his body? Where would he even get these concepts? What kid that age have you ever met who has any strong feelings about his biological structure, whether positive or negative? No, this child learned Nutspeak from the very people charged with "helping" and "guiding" him.

The best thing that could happen to this child is for him to be removed from the psychiatric/social worker/counselor/educator echo chamber and raised as a boy ought to be raised. But unfortunately that won't happen, because too many people have a vested interest in using his situation for their social-engineering projects.

Hey, long time no see. It's been very hectic. I'm going to Tanzania again this summer, and we're leaving this Wednesday, so there's been a lot of preparing to do.

Plus, what is there to say? It's summer, Ken Lay's dead, the New York Times is evil, half the country's flooded, the shuttle launched, blah blah blah. The usual.

I'm sure I'll be stopping by before I leave, but if you think to pray for me and my 13-year-old son who's going with me this year, I'd be grateful. It's a wonderful opportunity to encourage and assist the churches in the interior of the country there.
Posted by John at 12:35 PM No comments: