The Chicken Or The Egg?

CNN.com's current headline is, "Pop Star's Family Wants Answers, Says Jesse Jackson." For a minute, I thought, "Huh? What in the world does Jesse Jackson have to do with this? What possible connection does he even have to the Jackson family?" And then I suddenly remembered: ahh, the TV cameras.
Posted by John at 5:23 PM No comments:

Obviously, there's not much left to be said nearly 24 hours into the media maelstrom surrounding the sad-but-not-entirely-unpredictable death of Michael Jackson. When I heard the news yesterday, my first several thoughts were about Jackson as the circus attraction he'd become over the past 20 years. The surgical mask. The plastic surgery. The shrunken (and partially false) nose. The abuse allegations. The chimp. The hyperbaric chamber. The Elephant Man's bones. The kid hanging off the balconay. To be honest, Jackson's death didn't draw much more than a shrug from me. "The freak show is over," was pretty much all that registered in my mind.

Sometime last night, however, listening to the endless coverage, a snippet of a song broke through, and it brought something back to me that I'd almost forgotten. There was a time, before Jackson dissolved into utter insanity, when he represented something good. Last night I tried to explain it to my kids, who have grown up in a world where Jackson was still ubiquitous, but only as the world's biggest sideshow oddity. There was a short period, I explained, around 1982-1985, when this guy was the most exciting performer that anybody had ever seen.

I told them about watching the Motown 25th anniversary special in 1983. On that program, Jackson did "Billie Jean" (lip-syncing, no less) and gave one of the most electrifying performances in television history. It was one of those ultra-rare occasions when you immediately realize you've just seen something that's going to change everything. On that show, Jackson did his famous "moonwalk" for the first time. The next day at school, we were all trying to do it. (Frankly, I've still never seen anyone perfectly replicate it.)

I showed them that performance on YouTube. I showed them the video for "Thriller." I told them about how one single after another rolled off that Thriller album, providing most of the soundtrack for 1983 and into '84. In addition to "Billie Jean," (paradoxically one of the most popular--and yet somehow still underestimated pop songs of all time), "Beat It," "Human Nature," "The Girl Is Mine," "PYT," "Wanna Be Starting Something," "Thriller." The album sold something like 27 million copies, but more importantly, those were amazing songs. I still defy anyone to show me more than a handful of albums that you would even plausibly argue belong in the discussion with Thriller in terms of top-to-bottom quality. Combine all that with Jackson's unparalleled abilities as a live performer, and you wind up with a unique, indelible cultural moment. Of course, as many have pointed out, that period was also his curse. You don't catch lightning in a bottle twice, though Jackson spent years vainly trying.

Sure, it's only entertainment. Yes, the media is in wild overkill over the story. Absolutely, the overwrought reactions to Michael's death say something unflattering about our society. Strip all that away for a moment. The fact that we abuse entertainment doesn't mean that there is no value in being wonderfully, expertly well-entertained on occasion. And nobody was more purely entertaining than Michael Jackson at his peak. In all the Jackson news we'll be inundated with over the coming days and weeks, the only tiny thing I have to offer is a plaintive reminder to just forget about all the insanity for a few minutes and consider what Michael Jackson did when he was doing it at his best. Do yourself a favor and watch that Motown performance and try to imagine the world seeing this for the first time. Watch (and listen to) "Beat It," and see what made him the defining face of MTV.

Michael Jackson
Posted by John at 3:57 PM No comments:

Time Flies; The White Bronco, Not So Much 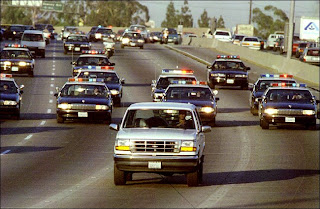 Sometime around the age of 30, it seemed as if someone had pressed the "double-speed" button on the remote control of my life. I remember my parents telling me how quickly time seemed to move once they got older, but I found that such assurances don't prepare you to handle the true surrealism of it. Now, when I'm asked how long ago some event occurred, I've learned to literally double my gut-estimate, and that usually pegs it just about right.

Anyway, all of this to say I was a bit surprised when an old coworker of mine reminded me on Facebook the other day that it was the 15th anniversary of the murders of O.J. Simpson's wife and her friend. And today, a few days later, is the 15th anniversary of the infamous low-speed chase on the freeways of Los Angeles after Simpson was named as the suspect in the murders.

What a strange week that was. My children, at the time, were 23 months old and five months old, respectively. What they know of O.J. Simpson is that he's a murderer and a pariah (and until recently walked free because of an incompetent prosecution). I've realized that it is impossible for them to understand what O.J. Simpson was before he killed these two people. If there is any former athlete today who is as personally adored as O.J. was, I can't think of him. Through talk shows, movies, sports commentary, and commercials, O.J. Simpson had woven himself into the fabric of American society in a way that even Tiger Woods or Michael Jordan could envy. I have no idea if they ever actually did favorability ratings on the guy, but if they did, I would be O.J. would've scored in the top 10% of all public figures in America.

That's what made that week so surreal. For those too young to have been there when O.J. was on top, it would be as if...oh, I don't know...Tom Hanks were suddenly being chased down the highway by the LAPD as a murderer.

That Friday is still very vivid in my mind. I was covering the Cardinals for KFNS, the all-sports station in St. Louis. After each game, we would do a live recap show from some local establishment featuring interviews with players. Right before the game, the television in the press lounge was blaring the press conference being held by the LAPD. Gil Garcetti, the district attorney, announced that not only was Simpson being charged with the murders, but that at that moment he was also a fugitive from justice. The jaded denizens of the press box literally gasped, as did the media members covering Garcetti on television. Simpson's friend Robert Kardashian haltingly read what appeared to be a suicide note from O.J. It was unreal.

It got weirder. A few innings into the game, someone came out of the lounge into the open air pressbox at the old Busch Stadium and told us that Simpson had been found and was being chased on the freeway. A bunch of us ran in to begin watching the drama unfold, while simultaneously trying to keep one eye on the game we were actually covering. All I remember is that the game finally ended, and I ran down to the clubhouse with the tape recorder to try to do interviews. It was useless. The players on both teams were repeating the scene from the press lounge, lined up in rows in front of the clubhouse televisions watching it all happen. I got some perfunctory comments about the game (the Cardinals had lost to the Pirates) from manager Joe Torre and a few others and scrambled off to some bar on Highway 40 we were doing that night's show from.

By the time I got back to the broadcast location, it became clear that nobody was interested in that night's game (nor in the NBA Finals game that had also been played). O.J. was now sitting in his Bronco on his driveway in Brentwood surrounded by SWAT teams. The worst-case scenario was looking more and more possible, and most of us were thinking "shootout." Right after I arrived with my post-game interview tapes that nobody cared about, we did a phone interview about O.J.'s legal situation with Jon Sloane, the station's morning host who was also an attorney. Then the station's general manager (who, as per usual on such occasions, was drunk out of his mind, and whose name is cleverly hidden in this series: xzxkszBobBurchxxxzx), who happened to be at the bar that night for some inexplicable reason, boozily ordered us to go back to the studio and start doing what turned out to be several hours of O.J. coverage. Man, did we scramble that night. We got one of O.J.'s NBC Sports colleagues (Todd Christiansen) on the phone late in the evening to give us his reactions. We strung a microphone into a little room at the station that had a TV in it and put the microphone up to the speaker on the TV set so that we could "carry" the LAPD press conference after Simpson's surrender.

The next day was the mug shot, and O.J. Simpson became the O.J. Simpson we now know. Decades later, it seems like it was never any other way. Jonnie Cochran and Robert Kardashian are long dead (with Kardashian's name now far more associated with his bimbo TV daughters than with him). Todd Christiansen has gotten rid of his mullet. Joe Torre went on to some moderate success after being let go by the Cardinals. My kids are now nearly 17 and 15 1/2. Fittingly, O.J. is spending this anniversary in prison, as he deserves. Though justice was not done in the murders of Ron Goldman and Nicole Smith, his criminal nature ultimately got the best of him and landed him where he belongs, albeit 14 years too late.
Posted by John at 12:21 PM No comments:

For any of you who are into that kind of thing (and I'm still trying to figure it out myself), I'm now on Twitter @johnrabe.

The good news is, my posts are much shorter, and I do it more than once a month.
Posted by John at 1:06 PM No comments: